Pop Up concerts held at various centers and are indoors or outdoors, depending on weather conditions. 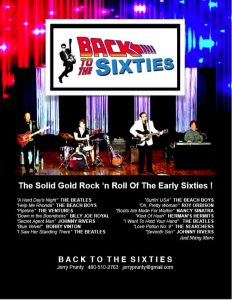 Featuring a variety of songs from the 60s, including:
“A Hard Day’s Night” THE BEATLES
“Help Me Rhonda” THE BEACH BOYS
“Pipeline” THE VENTURES
“Down in the Boondocks” BILLY JOE ROYAL
“Secret Agent Man” JOHNNY RIVERS
“Blue Velvet” BOBBY VINTON
“I Saw Her Standing There” THE BEATLES
“Surfin’ USA” THE BEACH BOYS
“Oh, Pretty Woman” ROY ORBISON
“Boots Are Made For Walkin” NANCY SINATRA
“Kind Of Hush” HERMAN’S HERMITS
“I Want To Hold Your Hand” THE BEATLES
“Love Potion No. 9” THE SEARCHERS
“Seventh Son” JOHNNY RIVERS
And Many More! 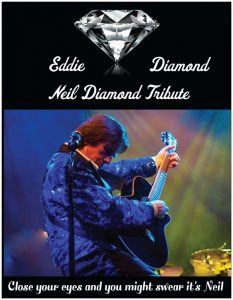 Headquartered in beautiful Scottsdale Arizona, Eddie Diamond and his all-star AZ Diamond band deliver a high-quality professional tribute to Neil Diamond and his timeless music.
Neil Diamond, whose career spans five decades is one of the most successful solo artists of all time, with arguably the most distinctive voice in the business. Eddie and his hand-picked ensemble of professional musicians recreate Neil’s vocals and orchestrations in such detail that few can leave the show without feeling as though they’ve been taken back in time to an era of music we all remember so warmly. Eddie Diamond’s uncanny vocal impersonation of the Rock superstar has taken his tribute act to theaters across the country. Find out why Eddie Diamond is fast becoming America’s favorite Neil Diamond tribute artist.