Each year, member households in good standing elect four of their peers to sit on the Board of Directors for a 3-year term. The following directors are finishing terms: Kathi Bachelor, Barbara Blake, Donna Coon, and Bev Lawless. 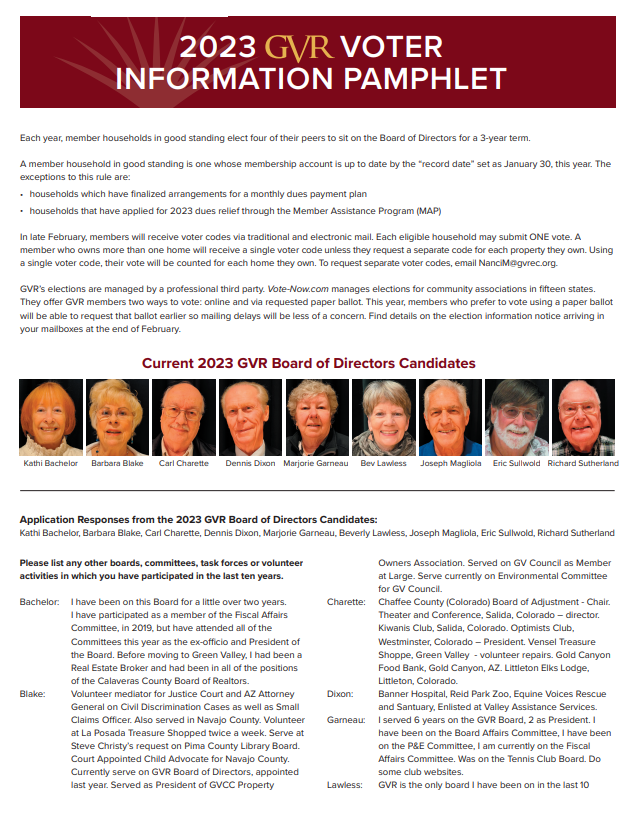 GENERAL INFORMATION ABOUT THE ELECTION AND VOTER ELIGIBILITY

A member in good standing is one whose membership account is up to date by the “record date” set as January 30, this year. The exceptions to this rule are:

Members may vote between March 1 and March 23, either online or via mail-in paper ballot.

Each eligible household may submit ONE vote.

In late February, all eligible households will receive via USPS, a notice of the Annual Meeting of the Corporation. That notice will include a VOTER CODE. Please retain this important piece of information. If you need a paper ballot, follow instructions to request one.

On March 1, all eligible households with an email address on file with their membership records will receive a voter code and a voting link via email. This should be the same voter code issued in traditional mail via USPS.

Bring your GVR card and the voter code you received in the mail. A volunteer will help you log in to the voting website, provide very brief instructions, then give you privacy to vote as you wish.

The Nominations and Elections Committee of the Board of Directors oversees GVR elections. Beth Dingman is the 2022 Chair. 2022 committee members are Marilyn Luehrmann, Arthur Mournian, Gail Vanderhoof, Gail Ault, Barbara Blake, Regina Ford, and Lou Sampson.  Nominations and Elections procedures are outlined in the Bylaws (HERE) in Article V, and in the Corporate Policy Manual (HERE) in Part 3, Section 6.

Election results will be announced shortly after 4pm on March 23, via GVR’s Friday “eblast” (electronic email) and on GVR’s Facebook page. A press release will be issued by 5pm.

February 22: Candidate meet-and-greet before and after the 2pm regular meeting of the Board of Directors at West Center Auditorium.

March 29: Annual meeting of the Corporation